Saint-Barthélemy is a small Caribbean island located in the French West Indies and is known for its beautiful beaches and stunning scenery. But, beyond the seemingly perfect paradise lies a unique culture that has been shaped by its European, African and Caribbean influences. From its colorful and vibrant music and dance, to its unique cuisine, Saint-Barthélemy is a captivating destination with a culture all its own. 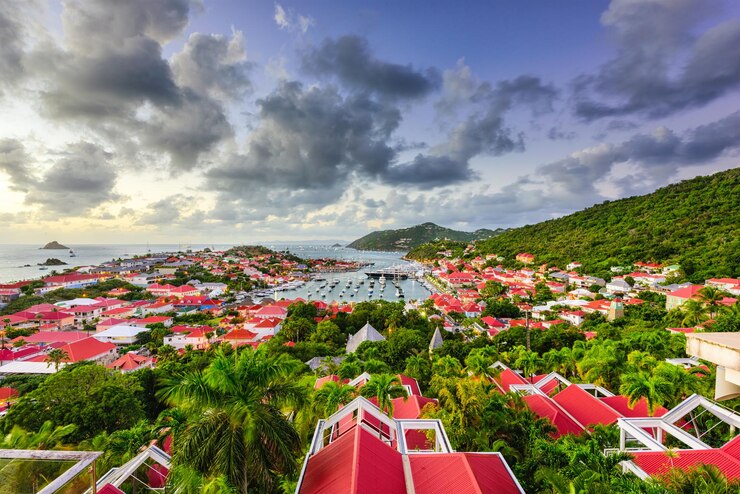 Saint-Barthélemy is an overseas collectivity of France located in the Caribbean Sea. It is approximately 8 square miles in size, and is situated about 40 miles west of Saint Martin. The permanent population is estimated to be 8,500, with the majority of the inhabitants being of European descent, mostly French and Swedish. The population also includes a mix of Africans, Caribbeans, and people from other islands. The primary language spoken on the island is French, although English and Spanish are also used by the inhabitants. The culture of Saint-Barthélemy is influenced by its French, Caribbean and Swedish heritage. This can be seen in the cuisine, celebrations, music, and the use of the languages on the island. Many of the traditions in Saint-Barthélemy are based on French and Caribbean customs, however Swedish influences can also be seen. For example, the Swedish midsummer festival and traditional Swedish cuisine mark this heritage. Despite the many cultural influences, Saint-Barthélemy is a distinct destination in the Caribbean, offering a distinct mix of cultures in a unique setting.

History of the island

Saint-Barthélemy is an idyllic island located in the Caribbean Sea. It is a French colonial island with a long history that dates back to the 1640s when Swedish settlers made it their new home. To this day, the island retains many of its Swedish touches, as evidenced by its language, architecture and art. For centuries, the island was a popular spot for pirates and privateers, who used the island as a base from which to launch raids on ships carrying riches from the Americas. This history of privateering and piracy, combined with its ideal geographical location, have given Saint-Barthélemy a unique culture. As a result, the island is known for its diversity of languages, cuisines and customs, making it an attractive and exciting destination for travelers seeking to experience a unique cultural experience. In addition, the island is home to a range of cultural festivals, including the Carnival of Saint-Barthélemy, which celebrates the island's history and culture. With a vibrant culture, Saint-Barthélemy is an ideal destination for those looking to immerse themselves in a unique culture and experience an interesting history.

Saint-Barthélemy is an overseas collectivity of France and the local cuisine reflects this. French influences are found throughout the island, but there are also many flavors inspired by the native population, the Caribs. Dishes like Accra, which are salt cod fritters, and bricks, which are sweet or savory pastries, are popular throughout the island. Seafood is also a major part of the local cuisine, with mahi-mahi, tuna, octopus, and more often featured on menus. There is also an abundance of tropical fruits that provide unique flavors to the island's cuisine such as mango, pineapple, guava, papaya, and more. Dining out in Saint-Barthélemy is an experience that is filled with local flavors, often served with French finesse. Most restaurants on the island feature traditional recipes, but some offer a more modern take on the island's food. No matter what type of cuisine you choose to enjoy, you are sure to find something uniquely Saint-Barthélemy to tantalize your taste buds.